Shortly after the founding of Dorris, Fred Stitser organized the Butte Valley State Bank. In 1955 the First Western bank and trust Co bought the bank. In 1961 First Western merged with United California Bank which later sold to Timberline Bank. Dorris‘ first city hall, a one story stone building costing $3,750.00, was built in 1928. The county supervisors allotted $1,000.00 to be used for incorporating a jail into the building. Until that time there had been an old wooden jail, which for many years did not even have a lock.

In August 1928 a fire which started in the bathroom of the Egeline barbershop, destroyed the Bradburn Hotel and four other buildings. There was a $50,000.00 -$60,000.00 loss, only a wind change prevented it from being much greater. In March 1929, three businesses burned two of them having burned in 1928 also.

In 1933 the Civil Works Administration awarded Dorris $3,250.00 for a project including a mile of sidewalks, reconstruction and graveling of the streets. On July 28, 1934 at 3 p.m. a fire started at the Associated Lumber and Box Company south of town. The fire jumped across Highway 97 and ignited an auto camp. From there extremely strong winds carried the flames through the main part of town. Twenty-two businesses and fifty residences were destroyed before the fire was brought under control. Among the buildings destroyed were the Dorris City Hall, which was gutted and later knocked down, and the George Otto General store. Fire fighting equipment was brought in from Klamath Falls, Weed, Tenant and Yreka plus two Southern Pacific tank cars with water. Damages reached $350,000.00. The Red Cross came into town and distributed $15,000.00 in aid to ninety families made homeless.

The Associated Lumber and Box Company rebuilt and reopened, and by December 1963, Dorris was out of debt for its postfire expenditures, which included a new city hall, built in 1935 valued at $20,000.00 and built with WPA money.

The 1934 fire found the city of Dorris with only a water barrel on a cart with a hand pump for fire fighting. In 1937 a fire truck was purchased and a well-organized fire department was formed. Today Dorris has what is probably one of the best volunteer fire departments in the state.

On October 5, 1936 the Weed to Klamath Falls highway was dedicated. The highway, although not completed, had been in use for several years. Before the 1934 fire Dorris was fairly self-sufficient. The only ways to reach Klamath Falls were difficult and often impassable, therefore it was profitable for businesses to come into the Dorris area. Once the business area was depleted by the fire and with a new highway going directly into Klamath Falls, Dorris never regained its former size.

In 1938, as a result of pressure from the Butte Valley American Legion, the Siskiyou County Board of Supervisors adopted a resolution forming the Picard cemetery district. Prior to that time the Picard cemetery had been cared for only through the volunteer efforts of the Dorris Grange

In 1946 it was announced that the Long-Bell Lumber Company plant and sawmill in Dorris would be closed indefinitely. The closing of the Long-Bell left Dorris, a town that had previously had a half dozen lumber mills, with only one major operation, the Associated Lumber and Box Co. The Dorris Lumber and Molding Company was a lumber processing plant only and had no woods or mill operations. In 1949 four Dorris men, Herb Gordon, Joe Shefley, Clifford Sevits and Les Spannaus bought the Long-Bell site and started the Butte Valley Manufacturing Company. In 1957 Mountain Valley Molding from Ashland Or. bought out the Butte Valley Manufacturing Co.

In 1950 Mr. and Mrs. Robert Edgar purchased the Dorris Telephone Company from Mrs. Billie Starr. The same year they gave Dorris its first 24-hour telephone service. In 1953 conversion to dial operation was completed.

In 1963 the Town of Dorris was changed to the City of Dorris. In July 1963, the city received a federal grant of $95,250.00 and a $100,000.00 bond issue to install a sewer system in Dorris. In 1966 another fire hit the Associated Lumber and Box Company destroying most of the buildings. The long red building at the south end of town on the west side of Hwy. 97 is the only remaining building. It was donated to the Butte Valley Museum and Historical Society in 1989. The log cabin located at that site is the old Dysert home. It was built in 1875 and moved from the Kern Ranch to its present location in 1989.

Information above written by Skip Taylor 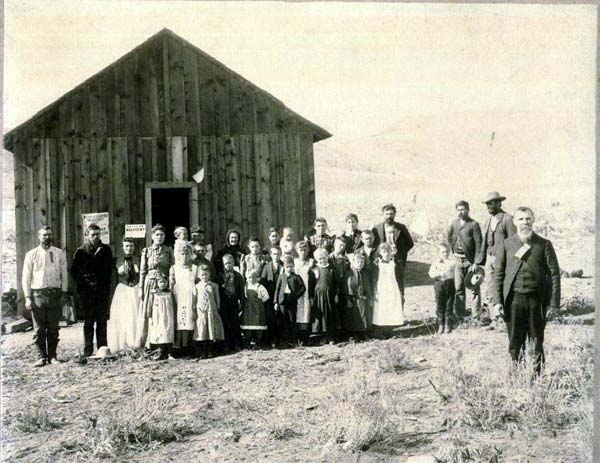 Photo taken around 1898 – 1900 of the first schoolhouse in Picard, provided by Jack Ciaccia.

The Stallsworth’s children are shown in the front row towards the left of the photo and lived there from about 1895. The other people shown have not been identified and we hope some one may offer some information. It looks like the picture was taken before July of that year. The photo was presented to Mary Stallsworth (one of the children in the photo) by her teacher, Mrs. Mary Otey.

Picture of the old Dorris train depot was sent in by Erin Craig from Calipatria, Ca.

Her Grandfather James William Craig (1885-1944) was the station agent in Dorris. Her father, James Robert Craig was born in the train station (house upstairs) in 1910. The Doctor of record was Dr. A.A. Atkinson.