Butte Valley, an area of about 130 Square miles which includes the city of Dorris, and the communities of Macdoel and Mt. Hebron, has dropped down between faults in this volcanic area and is completely surrounded by volcanoes to form a closed drainage basin. The down-faulted valley has subsequently been filled to its present elevation of 4,250 feet by alluvial debris washed into the valley from the surrounding volcanic mountains, by lava flows and by lake deposits. Meiss Lake, in the west central part of Butte Valley, is the remnant of a large lake that once occupied the entire valley when temperatures were cooler and melt water from receding glaciers filled the numerous basins in northern California. The combined depth of the deposits in Butte Valley is greater than 900 feet. The valley floor is exceptionally flat because of wave action when it was covered by water. 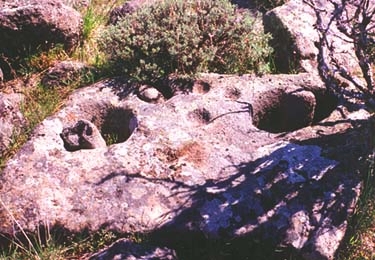 The history of the Modoc Indians in Butte Valley has been traced back approximately 7000 years through archaeological discoveries at Nightfire Island, adjacent to the banks of Sheepy Creek. Although their homeland is considered to be the Lost River and Tule Lake area, the Modocs roamed throughout the Butte Valley area. There are petroglyphs on Indian Point road and signs of a Modoc camp in the Pleasant Valley area.

In 1862 John Fairchild gave Capt. Jack (Kientpus, Kientpoo) and the Modocs $300.00 worth of horses and provisions in exchange for the privilege of running his cattle, unmolested, on tribal land. Presley Dorris also had a treaty with the Modocs. Fairchild and Dorris both got along very well with the Modocs. They were both well respected by the Modocs.

In April 1869, Capt. Jack and 371 Modocs left the reservation and moved back to their homeland on the Lost River. By November 1872, all peaceful attempts to return Capt. Jack and his followers to the reservation had failed. On November 29, 1872, Capt. James Jackson and forty men arrived at the mouth of Lost River to take the Modocs back to the reservation, peacefully if possible, by force if necessary. Fighting broke out on both sides of the river. Capt. Jack with some of his camp escaped to the Lava Beds. On the other side of the river, civilians attacked the Modoc camp. Huka (Hooker) Jim and his band escaped and headed for the Lava Beds to meet Capt. Jack. On the way to the Lava Beds Huka Jim and his band killed fourteen settlers in revenge for the attack on their village. The combined tribes counted 50 warriors and a large number of women and children. The Indians knew their liberty and even their lives were at stake.

When John Fairchild (J.F. Ranch) heard about the battle, he sent a messenger to the Hot Creek band of the Modocs. The Modocs had a meeting with Fairchild and an agreement was made that the Hot Creek band would remain peaceful, for the present at least, and if war followed and they joined the hostilities, they would not bother the settlers.

A few days later, John Fairchild, Presley Dorris, Nate Beswick and a Mr. Murray with Shacknasty Jim and another Indian paid a visit to Capt. Jack at the stronghold. In his treaty with Fairchild, Capt. Jack had reserved the Lost River camp for a residence, considering that he had sold the balance of the country to the stockmen. Jack requested Fairchild and Dorris to go to the soldiers and tell them not to come or he would fight them.

On January 16, 1873 troops descended on the stronghold. On April 11 1873, after almost three months of skirmishes, General Canby, Reverend Thomas, Indian Commissioner Meachem, Agent Dyar and Toby and Frank Riddle went to a peace conference to meet with Capt. Jack, Schonchin John, Boston Charlie, Huka Jim, Black Jim, Ellens Man and Shacknasty Jim. During the meeting the Indians opened fire. Canby and Thomas were killed, Meacham was wounded and Dyar escaped. After the ambush Jack and the Modocs escaped from the Lava Beds. Jack was finally captured at Willow Creek on June 1, 1873. The most expensive Indian war in the United States (estimated at ½ million dollars) was over.

This was the only major Indian war fought in California and the only Indian war in which a General Officer was killed.

On October 3,1873, Capt. Jack, Schonchin John, Black Jim and Boston Charlie were hung at Ft. Klamath. Ironically some of the most vicious members of the tribe, Huka Jim, Bogus Charlie and Shacknasty Jim, were entitled to their lives for services rendered in capturing their companions.

The remaining Modocs, including the Hot Creek Band, was rounded up and sent to Oklahoma. The change in cultural environment and living conditions basically destroyed the Modoc culture. 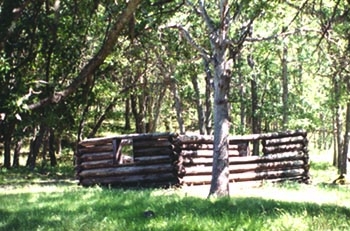 Historic Remains of a Log Cabin,Photo by Skip Taylor

The first authentic record of non-Indian travel in Butte Valley was in the winter of 1826-27 when Hudson‘s Bay Company fur trappers under Peter Skene Ogden, in a period of four and one half months, completely encircled the valley. In 1846 the south road party, from the Willamette Valley, Oregon, laid out the Applegate Trail. The trail branched out from the California Trail on the Humboldt River, near Winnemucca Nv. and led to the Willamette Valley via Tule and Lower Klamath lakes. From the head of Hot Creek, later site of the “D“ Ranch, to the Oregon State line, a distance of approximately four miles, the trail lay a scant two miles from northeast Butte Valley.

In 1861 John Fairchild, G.W. Hard and I.S. Mathews drove cattle and horses into Butte Valley. In 1865 Fairchild and the Doten brothers moved stock to a location called the 6 camp. Later the partnership was dissolved. The Doten brothers settling at 6 camp, now known as Meiss Ranch and Fairchild retaining 17,000 acres on cottonwood creek which was called the J.F. Ranch (now the Porterfield Ranch). In 1862 Presley Dorris settled the “D“ Ranch approximately 2 miles east of the present town of Dorris. The original ranch house has been preserved and is still there. 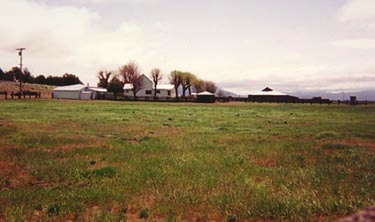 In the early 1890‘s the town of Picard was established when Frank Picard built the Pioneer Saloon. It was the first town in Butte Valley and was located about 4 miles west of the present town of Dorris. In 1898 Picard sold the saloon to Charles Silver. The town of Picard was quite small and there were few businesses; the Silvers Saloon; a general store owned by O.J. Reed and later sold to Merrill Reed; a hotel owned by Neil Sly and later sold to Mrs. Charles Silvers; a general store owned by Bob Oliver; a general store and livery barn owned by George Otto; the Al Bradburn Saloon; and the office of Dr. William Palmer Sweetland, who practiced during the 1890’s. There was also a blacksmith shop owned by George Spannaus and sold to John London. John London was married to Christiane London in 1900, she was a mail order bride and a nurse trained in Germany and Vienna. The London house was originally at the north end of Picard. It was later moved to what had been the center of town and is now occupied by Mrs. Struble.

In 1905 Laird‘s landing was established at the Laird‘s homestead on the southern tip of Lower Klamath Lake. The Klamath, an 80-foot propeller driven steamboat, began operations to transport freight and passengers from Laird‘s landing to Klamath Falls and Keno Oregon. Freight and passengers were transported to the ranch by freight wagons and by stagecoach In 1906 the Butte Valley Congregation of the Church of the Brethren started the town of Macdoel. The town was named for W.H. McDole the first land company president. When the post office was established, Aug. 7 1907, the postal department, either through error or by design, changed the name to Macdoel. 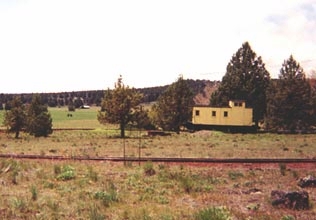 The railroad plays an important role in the history of Butte Valley.Photo by Marjorie Hazelwood

The town of Dorris was established as a result of the railroad coming through this part of the valley. Dorris was named for Presley Dorris of the D ranch. Dorris was incorporated in 1908. Several buildings were moved four miles from Picard to the Dorris townsite. The process was lengthy and involved, using horses, mules and round logs. The logs were placed in front of the building and as the teams moved forward the logs at the rear of the building were brought to the front and the process was repeated. Among the buildings moved was the George Otto general store. It took six weeks to move and never lost a day of business. The store was relocated to the corner of Third and Main streets in Dorris. Other buildings moved to Dorris were the Otto Livery Stable, Silver‘s Hotel, Bradburn Saloon, the Charles Spannaus house and the Congregational Church, later known as the Church of the Nazarene, which is still located on Oregon St. next to the Butte Valley Mall. The first hotel built in Dorris was the Grand Central. The first newspaper in Butte Valley was established in Dec. 1907. The first owner-publisher was Billy Bohannan; it was named the Dorris Booster. Over the next fifteen years two other newspapers were established under the names of the Dorris Reporter and the Dorris Times. In 1926 the Butte Valley Star was established. It has survived many hardships but now is no longer publishing. 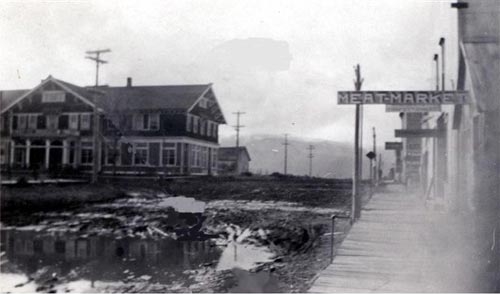 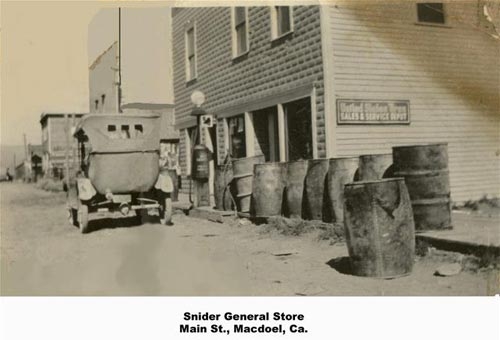 For more see Page 2 of History